The masterful Musicians who added melody & magic to our tales ... 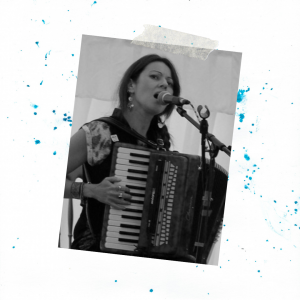 Charlotte has lived in North Thoresby most of her life and is a music teacher who has studied music in the traditional way, as well as performing keyboards, vocals and accordion in original and covers bands in Lincolnshire and London for 20+ years.

She is also a session musician with lots of experience of recording keyboards, vocals, accordions etc. and a composer/recording artist in her own right.

Charlotte was a trainee Folk Arts facilitator in primary and secondary schools, and has recently been teaching Piano in the Louth Academy High Schools and The Pump House recording studio in Louth and gigging with her piano rock covers duo.

Tom has been scoring and producing soundtracks for film & TV since completing his Masters in Music in 2012. His work is featured on domestic & international TV and in film festivals across the world. He also scores, performs and produces music for theatre, specialising in new writing and developing contemporary work.

Tom’s music is broadcast on a range of channels worldwide including BBC One, Channel 5, Discovery, & respective affiliates, and is streamed in shows & films through various services including BBC iPlayer, Netflix & Amazon Prime. His work for theatre has been performed throughout the UK with runs in London, Edinburgh and Birmingham.

Tom has been part of the BFI NETWORK X BAFTA Crew programme and is a Principal Voting Member of PRS for Music.